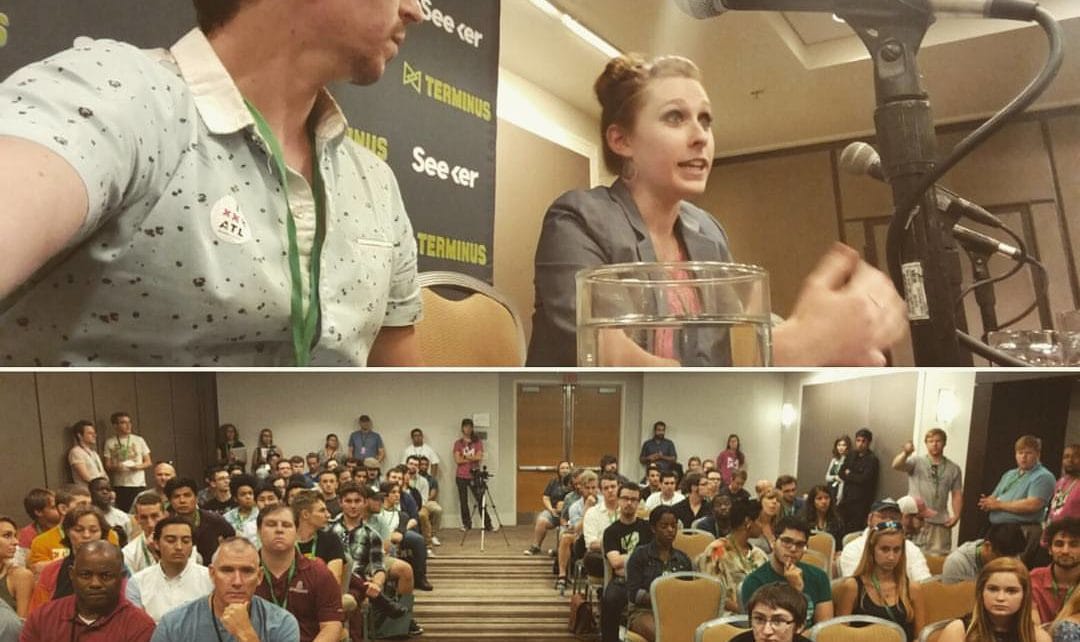 Ideas United presents the inaugural Terminus Film and Interactive Festive in Atlanta. Representing our company Moonshine, our founder Drew Sawyer spoke at the festival alongside Marvel VFX editor Emily “Big Deal” Denker. He was a panelist at two post-production workshops that weekend, swapping stories and sharing information with an audience of film professionals from all over the US.

From Drew: “I learned a ton and had a great time with colleagues, friends and industry leaders. I sincerely hope this conference becomes the ‘something great’ it’s striving towards. I hope it comes into its own instead of posturing or perpetuating vain pursuits of being ‘like’ other film and interactive conferences, and becomes a great professional and industry tool – or at least a really freaking cool party like Dragon Con.”

Calling itself “A Festival, A Party, A Convention,” TERMINUS is clearly seeking to strike a sweet spot between teaching professionals and giving them a place to celebrate with each other. Featuring numerous panels, workshops, screenings, and awards, the conference is a four-day event presented by Ideas United that brings together talent from all phases of the film and television production industries. (Read more about Ideas United here). Ideas United is seeking to create a valuable new tool for technicians and artists alike and hopes to continue the TERMINUS event on a yearly basis to help inform and connect the stellar film talent from around the city.

I was honored to share information alongside big shot Emily Denker, today. We did two panels at the Terminus Film and Interactive conference this afternoon and shes a total badass (and passionate, as her photo illustrates). Thanks @charlesjudson and IdeasUnited for pairing us. Justice was served. We got our fix in post. #Terminus #moonshineatl #postlyfe #fixitinpost