Get Your Booty to the Poll! PSA Gets National Attention

Home / Announcements / Get Your Booty to the Poll! PSA Gets National Attention

Our long time friend, director Angela Barnes, reached out to collaborate on a bold Voter PSA along with Atlanta-based producer Paul Fox, and a group of Atlanta’s all-star competitive and professional dancers. The fearless piece holds a non-partisan, two-fold message: “There’s more on the ballot than the President,” and “Don’t let other people run your community.” Elaborated with acrobatic performances, and backed by a song composed by actor, rapper and Atlanta writer, Stephen Glover, the PSA, Get Your Booty to the Poll has now been shared across the world on news outlets such as NPR, CNN, VICE, The Late Show with Stephen Colbert, Glamour, People Magazine, Newsweek and more. You can read these stories and stay up-to-date on the growing media coverage by visiting the Get Your Booty to the Poll website. The message has reached far more people than we ever anticipated!

“THE SINGLE BEST VOTING PSA THE WORLD HAS EVER SEEN…”

In what could easily be called the most enthusiastic review, John Oliver from HBO’s Emmy-Award Winning Last Week Tonight deemed Get Your Booty to the Poll “the single best voting PSA the world has ever seen.” He goes on to say the PSA covered the range of topics addressed by the show but in a more efficient and entertaining way. Oliver wraps his review by saying “I have NO notes!” 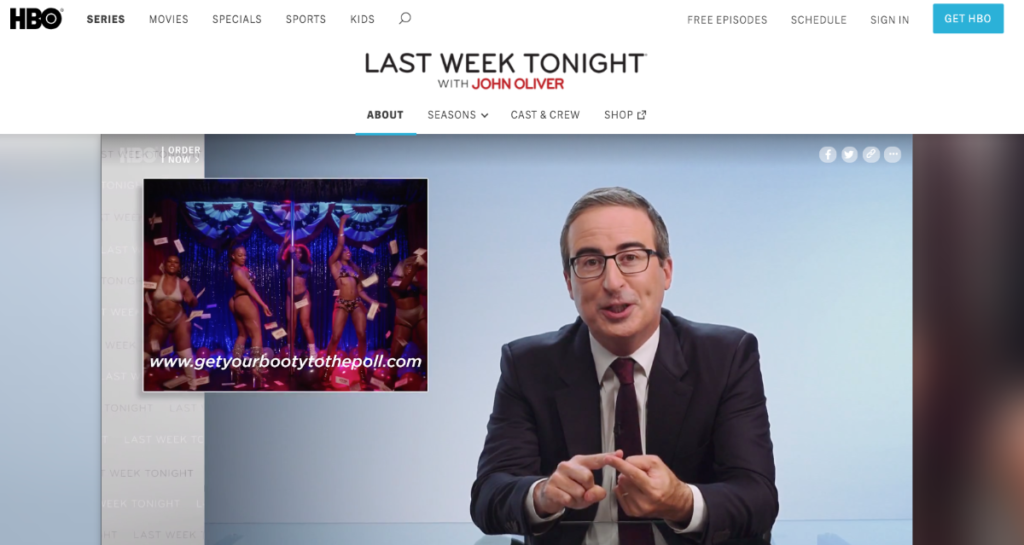 We’re proud to have taken part in a project that not only displayed a creative and innovative approach to encouraging voter turn-out, but also showcased the power of the Atlanta community and what we’re able to achieve when we work together towards a common goal.

NOW GO GET YOUR BOOTY TO THE POLL!